In cinema, the tabletop is the most dramatic location for an on-screen tryst. Writer Charmian Griffin watches the movies that know how to put on a good spread.

‘One minute more,’ he asks of her. Who wouldn’t? Helen Mirren sits on a table with her back to us. She plays Georgina, the titular Wife in Peter Greenaway’s film The Cook, The Thief, His Wife and Her Lover. Blonde hair coiled up off her neck, she is positioned centre screen, perched on the edge of the wooden table, knees turned left towards Her Lover who sits on a chair looking up at her. A morbid aviary framing them – noosed grouse, a brace of partridge, pheasants half way from shot to pot – the scene unfolds in an adjunct to the kitchen of a French restaurant. Le Hollandais is reputable so this larder of hung birds must not be much warmer than a domestic fridge, but the humans are naked and seem comfortably so. It does not take a genius to surmise that these are the moments that come straight after they both did, on that table no doubt – moments that, though languorous, are still counted down by the watch that ticks at Georgina’s wrist. Her husband, The Thief, rages in the restaurant beyond, where a song, just audible, plays out: ‘I am waiting. I am waiting. Come up with something sometime now. We’re only here for love.’ She grants thirty seconds.

When two people who really shouldn’t be, are, nothing says abandon like going at it on a table. A filmic trope, complete with subsets such as dining (both domestic and public), pool, coffee, conference etc, the sex table has braced many a bottom less fine than Mirren’s. At the time of writing, the Internet Movie Database gave 116 entries tagged sex-on-table; 42 more specifically containing sex-on-pool-table; fourteen sex-on-a-kitchen-table; four oral-sex-under-a-table, so on, so forth.

The cliché is so firmly positioned in our minds that table sex can take place without the need for it to be shown on camera. During a dream sequence in Luis Buñuel’sBelle de Jour (1967) a prospective lover beckons Catherine Deneuve to disappear with him beneath a restaurant table. Their respective spouses and the audience are left to imagine what might really be happening under the shaking tablecloth. Big Brother 5 housemates Michelle Bass and Stuart Wilson spent one hour and 45 minutes together under the kitchen table in 2004. The hard surface above them, unyielding to bodily forms, provided more refuge from surveillance cameras than sheets and blankets. But although unseen, their speculated actions were still printed as newspaper headlines and bookies made five-figure payouts, the odds being evens, on sex having taken place in the reality TV household. Just as in fiction, only a few components were required: two people and a table and all bets were off. Etiquette dictates more often that the audience exit the room with a glimpse of tabletop thigh and a tumbling embrace; sometimes not even this much is granted. ‘You’re dead,’ Stifler’s Mom tells Stifler’s friend Finch in American Pie (1999), dragging him off-screen to leave us watching their vacated leather seats, the noise of scattered billiard balls signalling the inevitable. We know what they’re up to, we always do. Each recurrence sets the film reel of memory rolling beneath the one we are watching, reinforcing our expectations in what experimental filmmaker Maya Deren termed a ‘continuous act of recognition’ in her essay ‘Cinematography: The Creative Use of Reality’ first published in 1960. This particular trope is so familiar it can be implied with the barest of nuances, the briefest of screen time. But why the repeat? What, narrative-wise, is table sex up to? 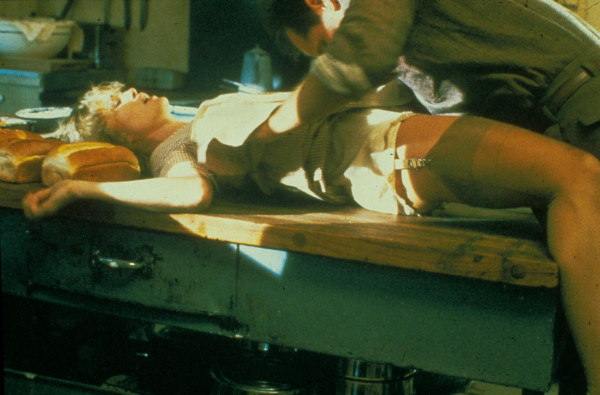 First, it must be decided what constitutes a table in the make-believe montage of filmmaking. How does a surface parallel to the ground but elevated above it on at least one leg hold its own as a table? Buoyed by surrounding props and set, the table needs to float as a surface of specific use, providing space on which things relevant to the scene could be placed. This is what makes a table: its adequate reception of knives and forks, pens and paper etc, not bottoms – however fine. Tables are symbolic of social order, but despite their seeming stability, the incivility of carnal acts knocks the furniture momentarily off balance. In the 1981 film adaptation of The Postman Always Rings Twice, Jack Nicholson crashes Jessica Lange down snarling and moaning amongst a row of loaves cooling in their tins, a pie dish, and a pillow of pastry dough. She is married, bored, beautiful; he is passing through town, morals as loose as his roots. Copulation on the kitchen table of her husband’s diner is a catalyst for murder, blackmail, death and disunion, and as if the recklessness of the location were not enough, Jessica stops animal Jack to clear some space; bread tins clatter, she flings a large kitchen knife to the floor, underscoring its symbolic descent with a sweep of flour into the air.

The characters are sometimes doing the wrong people in addition to doing them in the wrong place. They’ve made a sideswipe, a tiny one, at the status quo. But if the status quo is to be maintained, it must have its sacrificial goats. The exact form of retribution is arbitrary, as is the amount of time between the act itself and when it all blows up, but the rebellion enacted by tabletop loving is punished eventually: Wesley Snipes loses his job, wife and family after sex with a colleague on a desk in Spike Lee’s Jungle Fever (1991); an affair that begins between Greta Scacchi and Harrison Ford on a desk in Presumed Innocent (1990) ends when she is murdered by his wife and he is prosecuted for the crime. Even legitimate marital intercourse is not excused: the eponymous character is introduced in The Contender (2000) having exactly that on a desk, then spends the rest of the film having her personal life dissected in public court.

Don’t hate the players, hate the game. When characters rebel against civilisation by taking their pleasures amid the cutlery, perhaps it is not the furniture itself that seeks vengeance but the shadowy executors of compliance. What is it about these sturdy surfaces that they can hardly absorb a bit of bump-and-grind without rocking out some minor anarchy in retaliation? If as a character you wish to retain life and liberty, your best options are the softer furnishings in your own home: a couch, a sheepskin rug by a fire or, ideally, a bed. Comfort indicates forethought, planning, and is inversely proportional to the narrative punishment with which film often encumbers tabletop lovers; unlike the even more incommodious car, where consequence is often instantaneous, table sex only lights disaster’s fuse. The bomb will go off but the spark has a way to travel. 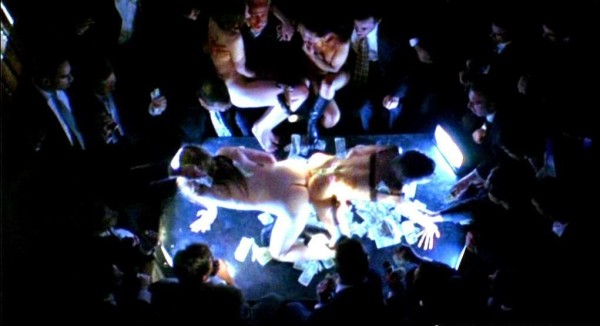 Gratefully back to Helen Mirren who I left awarding Her Lover Michael thirty seconds; a gift he intends to make good use of. One arm on her back and one on her neck, he supports her backwards cambré as her arms frame the line traced by her arching spine, hands sliding diagonally to the far corners, pushing a tide of feathers off the edge of the pheasant-plucking table. This is not the last time they make love, nor the first, but this specific instance – witnessed by someone who will later inform Georgina’s husband Spica of her unfaithfulness – is the pivot that swings the world of this film from a bloody crumbling dictatorship to the bloodier chaos necessary to kickstart a revolution.

Tables in The Cook, The Thief, His Wife and Her Lover are the dancers in a choreography of power. A painting by Frans Hals of military officers at a banquet table hangs in the restaurant; the seventeenth-century thugs it depicts incarnate in the gang of crooks and bullies who terrorise the venue nightly at Spica’s command. He controls every aspect of his surroundings through force to assert his rule of the roost. He knows the importance of furniture: ‘Henry! Give me those glasses off that table. And the flowers. This should look the most important table here.’ And it does: Spica’s table, the largest, positioned centrally with its oil-painted ghost as a backdrop, commands attention. But it also dances to a different beat. Early on in the film, after a silent, awkward but charged encounter by the lavatories, Georgina returns to her seat at Spica’s table and Her (not yet) Lover Michael to his in the corner. Then, in what seems retrospectively an act of matchmaking, each is served a plate of the same food. They take a mouthful and glance at each other across the room before returning to the loo to make silent, awkward, charged love. The head table, a platform for things, is also the stage for Spica’s downfall, a cuckoldry that will mark his fall from power. When he finally whips off the tablecloth, like that failed magic trick which often acts as hackneyed prefix to tabletop lovemaking, it is not to free his passion of obstacles such as a stray fork or champagne flute, but to vent his anger on discovering what Georgina was really doing on those many extended toilet breaks.

It is clear that outside the microcosm of the restaurant, some greater chaos reigns. When Georgina points out that Spica’s favoured henchman behaves badly only because he is mimicking his mentor’s behaviour, she could be speaking pointedly about the state; its people the copycats of some more powerful bully. The Cook, The Thief, His Wife and Her Lover was released in 1989, the year of the Hillsborough football stadium disaster in the UK, the fall of the Berlin Wall and the end of the Cold War. It was Margaret Thatcher’s tenth year as Prime Minister and the poll tax, an equal levy on all households regardless of income or number of occupants, was rolled out in Scotland. The film is an outcry against this kind of state thuggery and a call for solidarity. The following year in London, demonstration and protest turned to riot. Thatcher resigned.

Georgina loses Her Lover in those thirty stolen seconds. This is when she indulges in the most anarchic of all table sex. Each repeated intimacy between her and Michael sets in motion Deren’s double exposure, not only for viewers, but also for the characters. If the lovers were able to defy The Thief, so too could the restaurant staff, the other diners, his own flunkies, all victims of his rule. Georgina and Michael’s lovemaking is accelerant to a rebellion, reaching right there among the feathers the climax of its trajectory. They are caught out; they had to be. Spica’s fury shatters the kitchen that has shielded the lovers and empties the restaurant that was their world. ‘I’ll bloody kill him and I’ll bloody eat him,’ he roars, impotent. Michael and Georgina flee, still naked, in a van full of rotten meat. Enacting his master’s vengeful orders, the copycat henchman finds Michael and chokes him to death on his favourite book: The French Revolution.

Pheasants, though they must be hung refrigerated to flavour their flesh without rotting it, are most easily plucked warm. The best revenge too, in Le Hollandais and whatever world lies beyond it, is chilled and then heated to perfection. At Georgina’s request, The Cook prepares Michael’s body for its final delectation, revolution in his belly. Holding a gun to his head, Georgina forces her husband to eat Michael’s words at a table set for one. ‘Cannibal,’ she whispers, and shoots him dead.